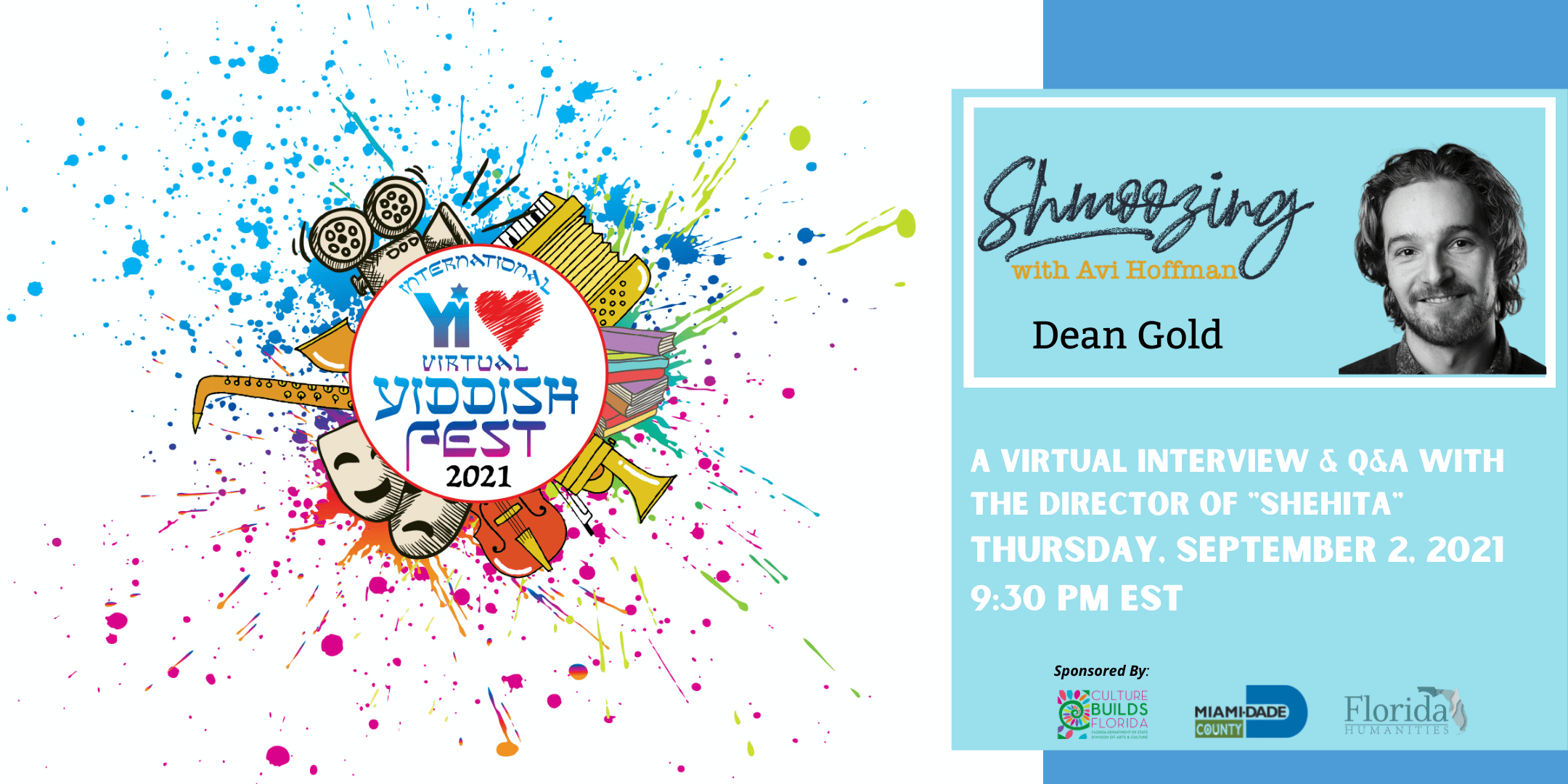 Shmoozing with Avi Hoffman -Q & A with the director of the award-winning short film "Shehita" Dean Gold as part of YI Love Yiddishfest 2021.Q&A after the award-winning short film screening of Shehita with director Dean Gold.Dean Gold is a Toronto-based filmmaker. A proud program of Yiddishfest 2021!To view this free event LIVE and via replay, please go to the following links:https://www.youtube.com/c/YiddishkaytInitiative/featuredhttps://www.facebook.com/YILoveJewish/videosFor assistance:info@whyilovejewish.org888-YILOVEJ. 888-945-6835With the support of the Miami-Dade County Department of Cultural Affairs and the Cultural Affairs Council, the Miami-Dade County Mayor and Board of County Commissioners.Sponsored in part by the State of Florida, Department of State, Division of Cultural […] 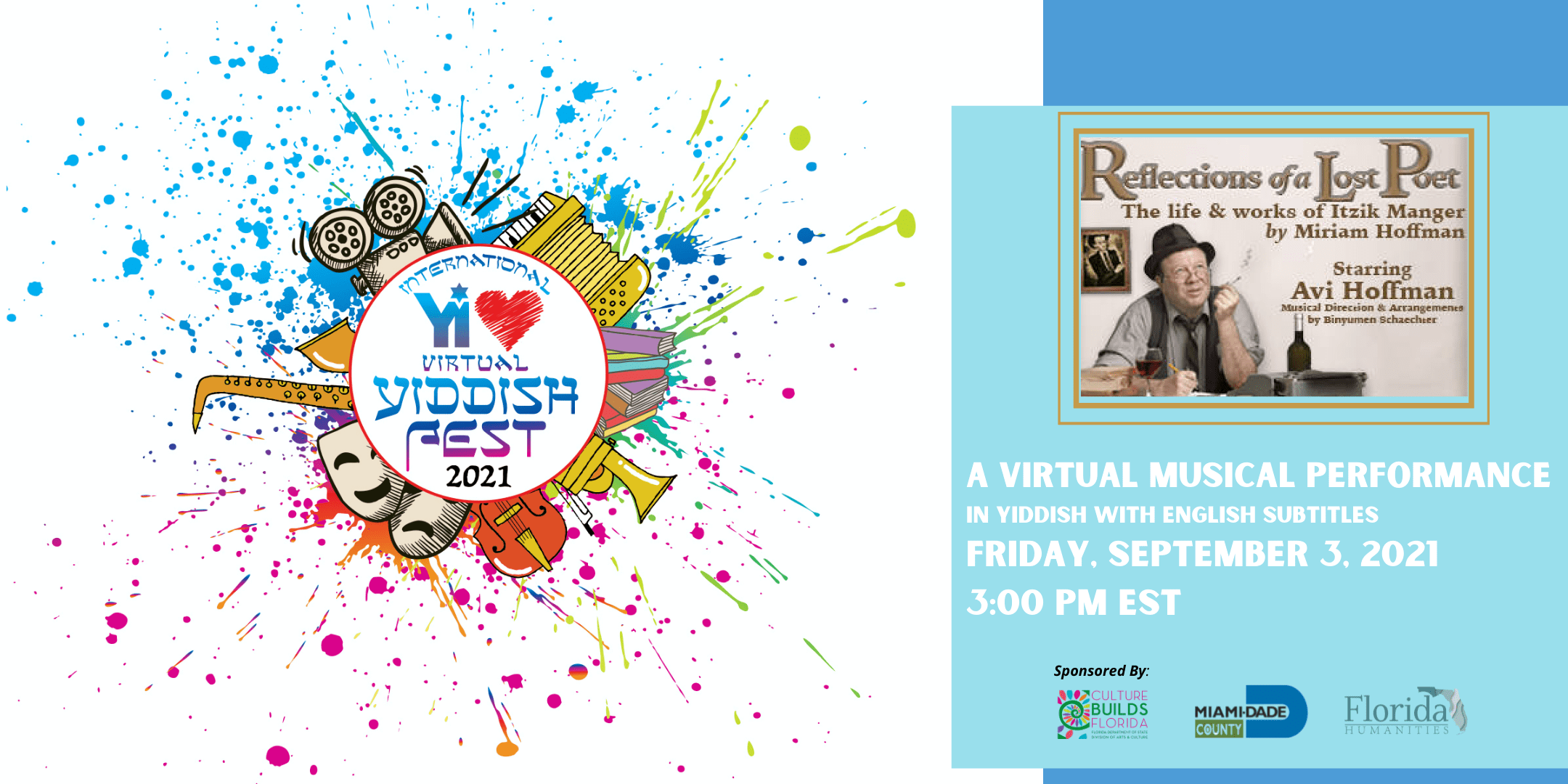 A virtual musical performance of Avi Hoffman in Reflections of a Lost Poet: The Life and Works of Itzik Manger By Miriam HoffmanAs part of YI Love Yiddishfest 2021Musical Direction and Arrangements: Binyumen SchaechterThis serio/comic monologue (Yiddish with English Subtitles) follows the life and times of the poet Itzik Manger, considered one of the greatest Yiddish poets. Through his songs and poems, we discover the joy and anguish of a Yiddish poet, who lives through the best and worst of times.Reviews:Hoffman shines - N.Y. PostIntegrity... Laughter... Passion... Oy, Bravo! - The Village VoiceA masterful performance - A tour de force... - […] 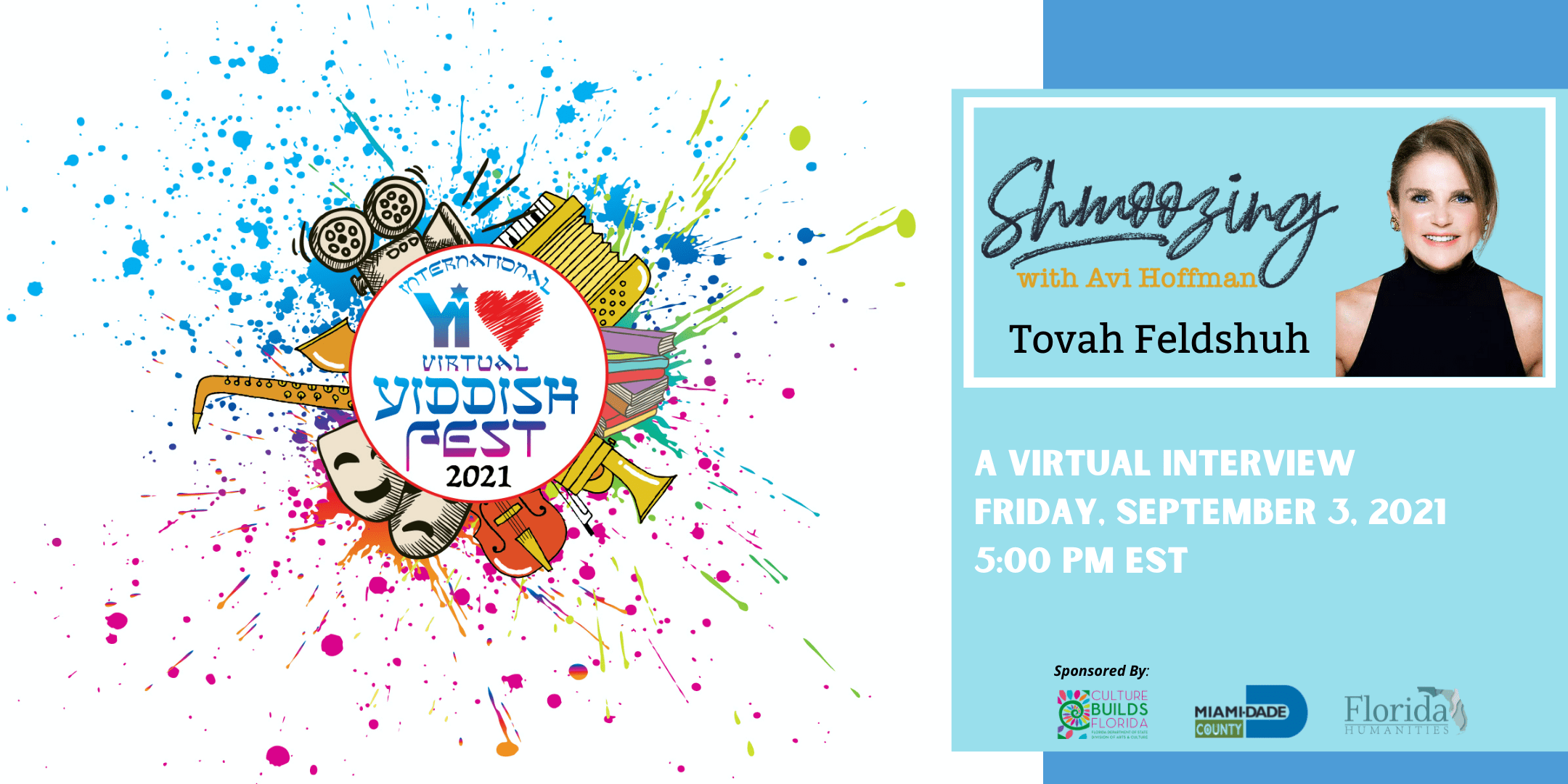 Shmoozing with Avi Hoffman featuring Tovah Feldshuh as part of YI Love Yiddishfest 2021Terri Sue "Tovah" Feldshuh (born December 27, 1952) is an American actress, singer, and playwright. She has been a Broadway star for more than four decades, earning four Tony Award nominations. She has also received two Emmy Award nominations for Holocaust and Law & Order, and appeared in such films as A Walk on the Moon, She's Funny That Way, and Kissing Jessica Stein. In 2015–2016, she played the role of Deanna Monroe on AMC's television adaptation of The Walking Dead.A proud program of Yiddishfest 2021!To view this […] 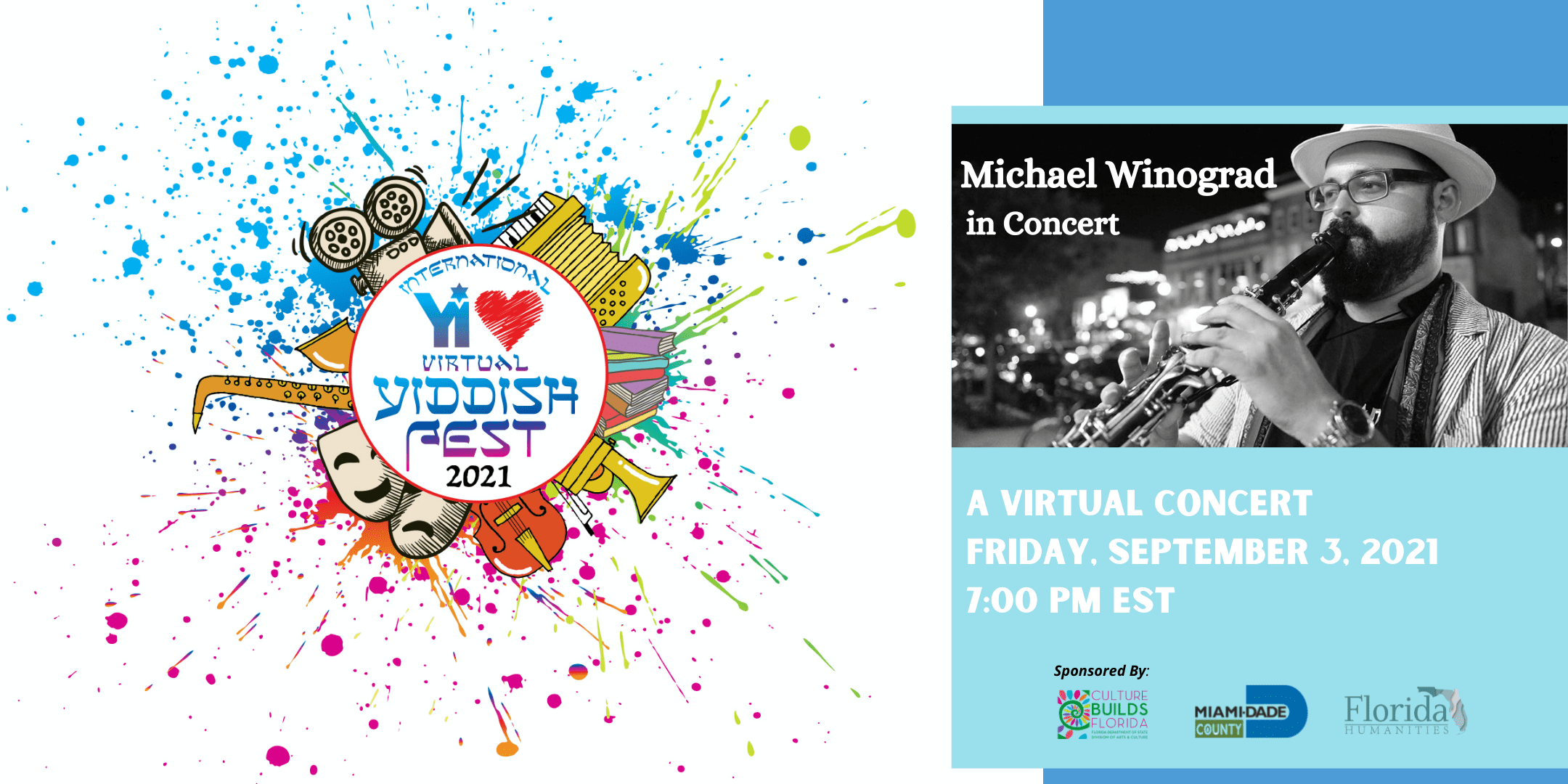 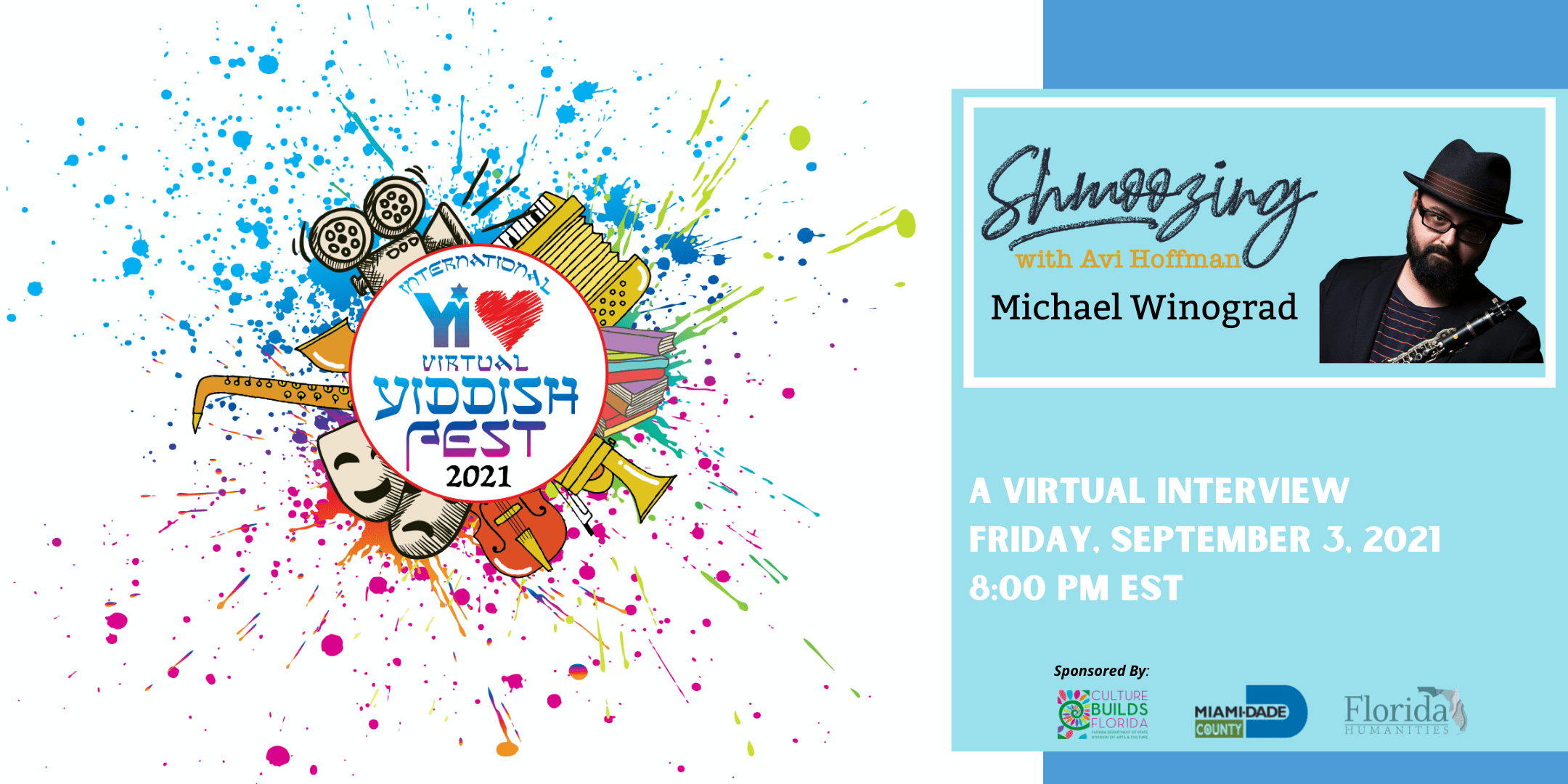 Shmoozing with Avi Hoffman featuring Michael Winograd as part of YI Love Yiddishfest 2021​Clarinetist Michael Winograd is one of the most respected and versatile working musicians in klezmer music today. Based in Brooklyn, New York, Michael spends much of his time in transit, performing and teaching throughout the world. He is one third of the transatlantic klezmer/cabaret collective Yiddish Art Trio, clarinetist of Tarras Band, a classic 1950’s Jewish American tribute group, and the co-founder and director of the ground breaking, borderless world fusion band Sandaraa. Michael also collaborates with Cantor Yaakov ‘Yanky’ Lemmer and Klezmatics trumpeter Frank London in Ahava […] 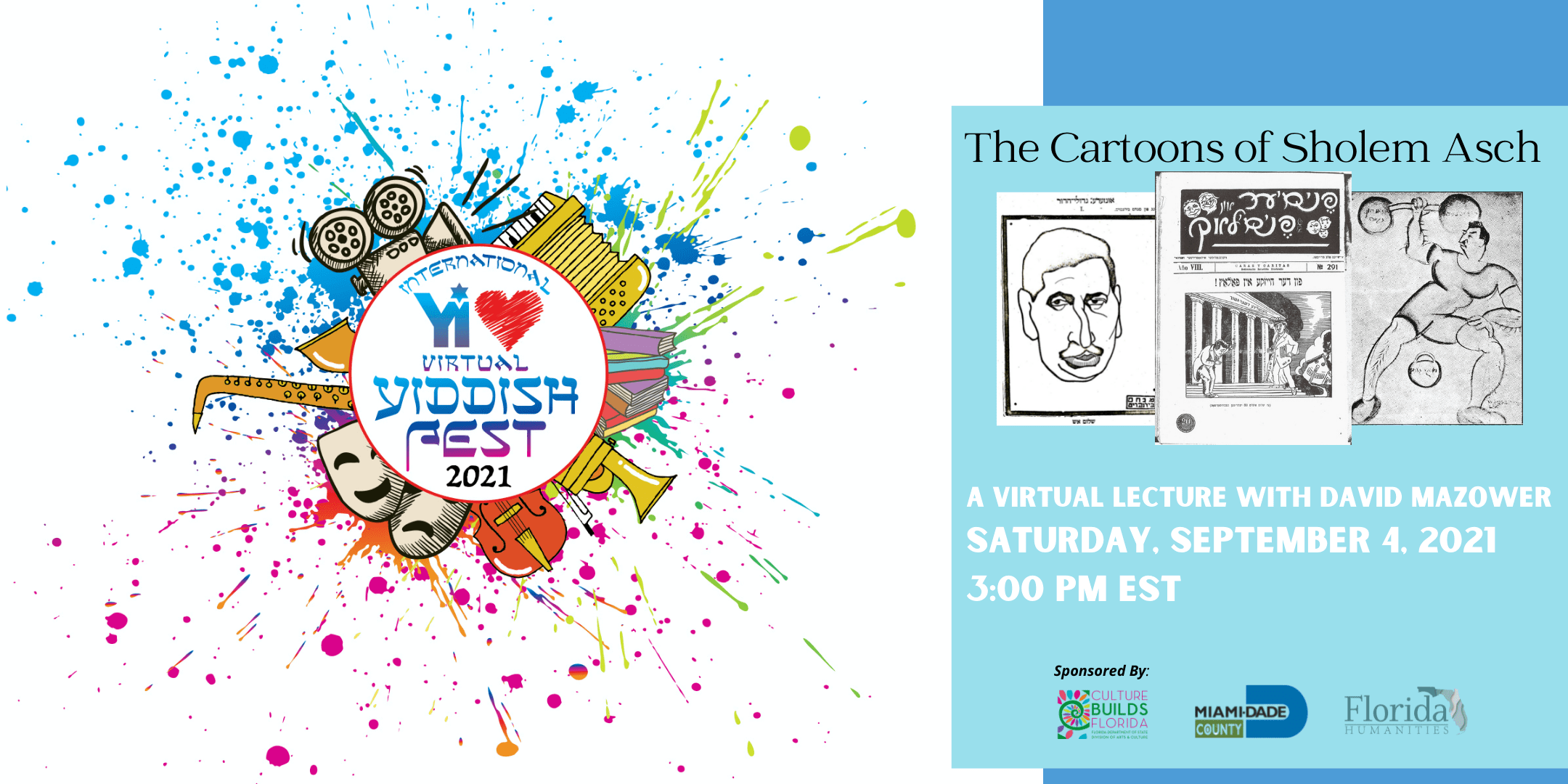 A virtual lecture with David Mazower - The Cartoons of Sholem Asch as part of YI Love Yiddishfest 2021Boxing, Wrestling, and Tilting At Windmills: Cartoons of Sholem Asch in the Yiddish PressEver since a young Sholem Asch burst onto the Yiddish literary scene with his 'brothel play' God of Vengeance, he was a favourite subject for the irreverent cartoonists of the Yiddish press. They found ever more inventive ways to caricature his celebrity and outspoken personality, depicting him wrestling with rival Yiddish writers, or lifting weights to develop Popeye muscles. In another glorious image, his campaign for a Yiddish art theater […] 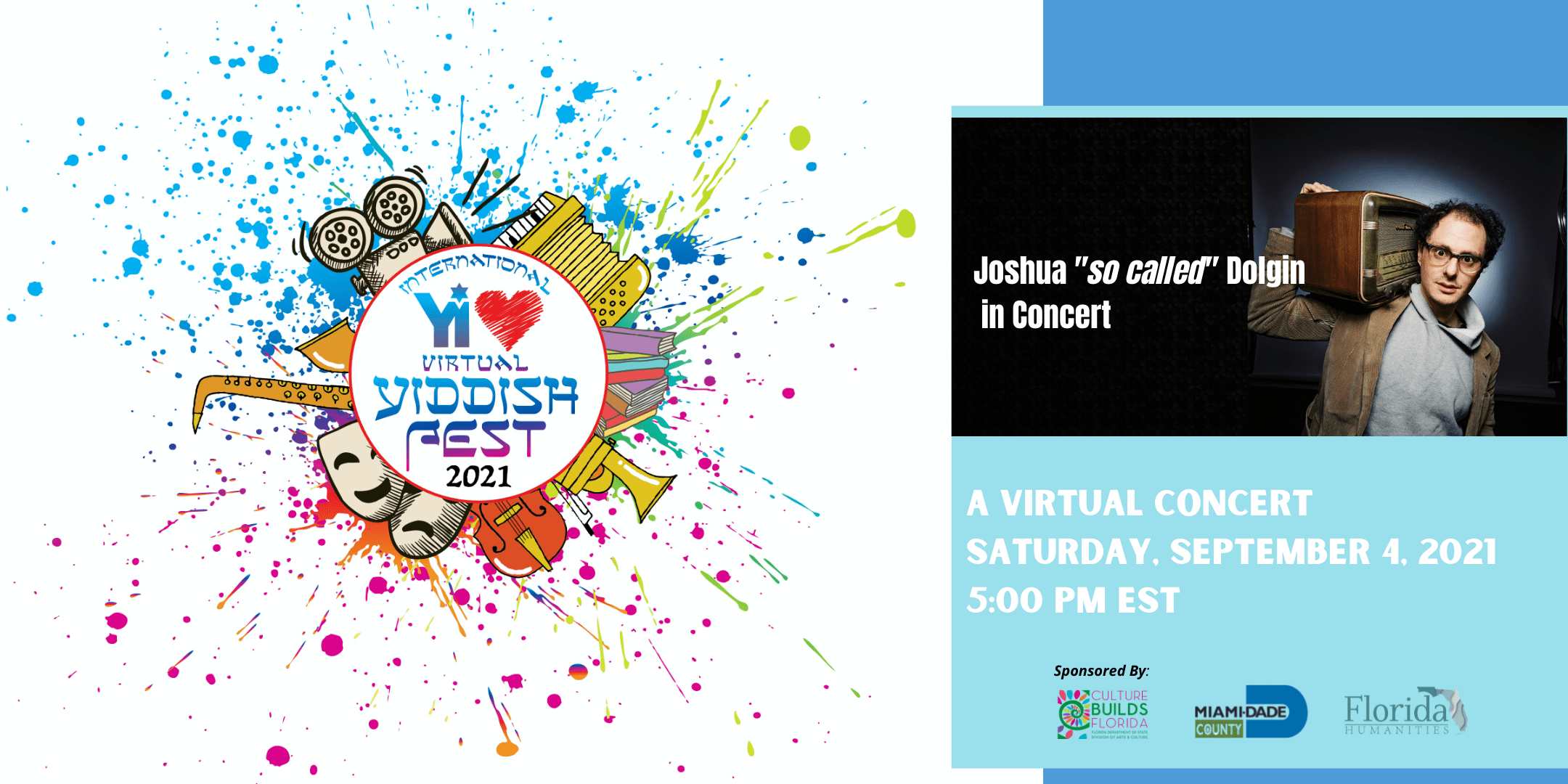 A virtual concert with Joshua "SoCalled" Dolgin as part of YI Love Yiddishfest 202160 minutes of Josh “Socalled” Dolgin performing solo from the quarantine childhood bedroom. Yiddish songs, his unique blend of hip hop and Klezmer, some Kurt Weill and maybe a magic trick.A proud program of Yiddishfest 2021!To view this free event LIVE and via replay, please go to the following links:https://www.youtube.com/c/YiddishkaytInitiative/featuredhttps://www.facebook.com/YILoveJewish/videosFor assistance:info@whyilovejewish.org888-YILOVEJ. 888-945-6835With the support of the Miami-Dade County Department of Cultural Affairs and the Cultural Affairs Council, the Miami-Dade County Mayor and Board of County Commissioners.Sponsored in part by the State of Florida, Department of State, Division of […] 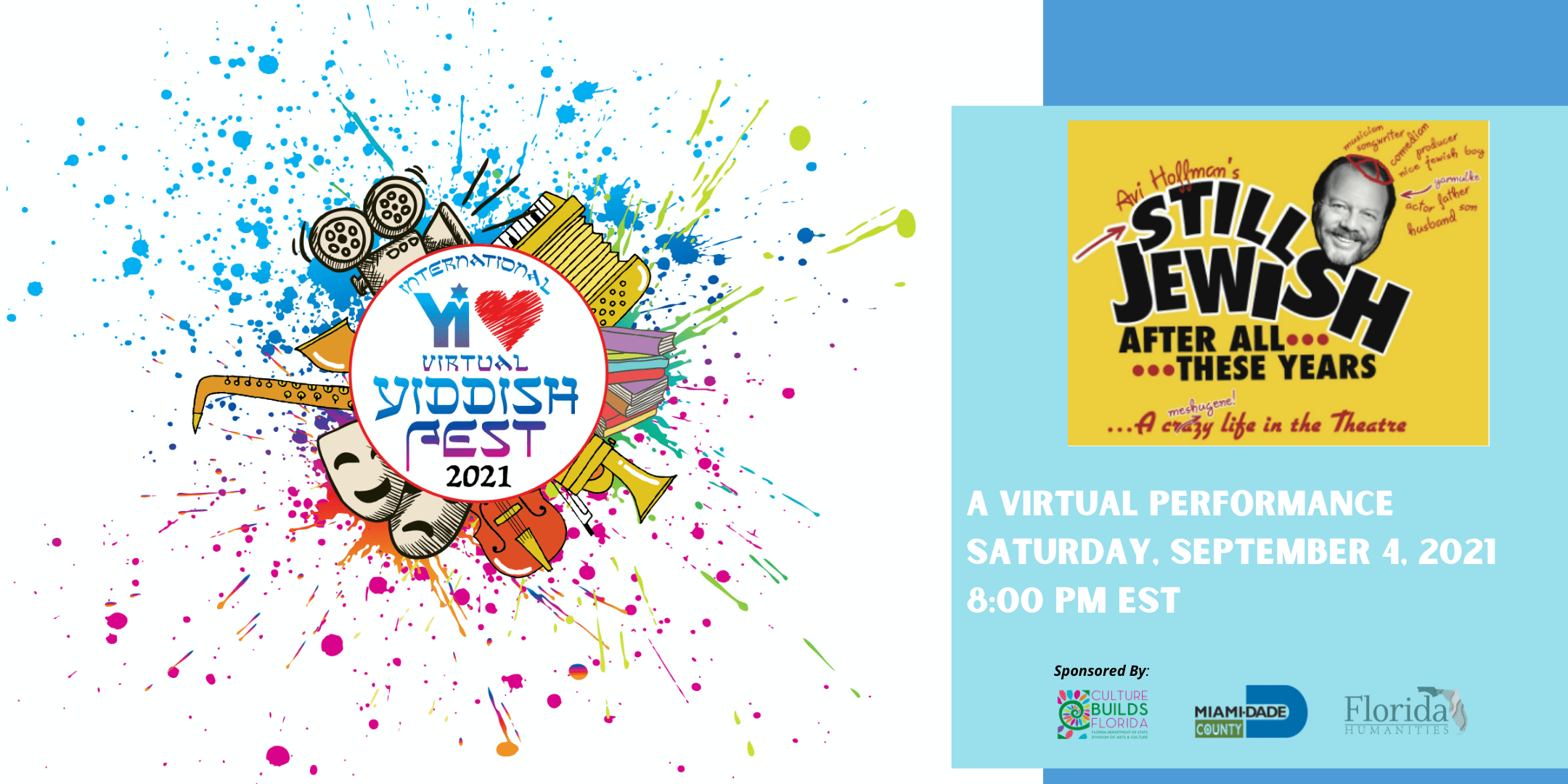 A virtual performance of - Still Jewish After All These Years starring Avi Hoffman as part of YI Love Yiddishfest 2021.Avi Hoffman was recently awarded Congressional recognition, was invited to the Vatican to meet Pope Francis and was inducted into the Bronx Jewish Hall of Fame for his lifetime work advancing Jewish culture, Yiddishkayt and Holocaust awareness through the charity he founded the Yiddishkayt Initiative, Inc. (YILoveJewish.org). As an actor, he was nominated for a NY Drama Desk Award for his Yiddish language portrayal of Willy Loman in Death of a Salesman. He is best known for his Too Jewish Trilogy: […] 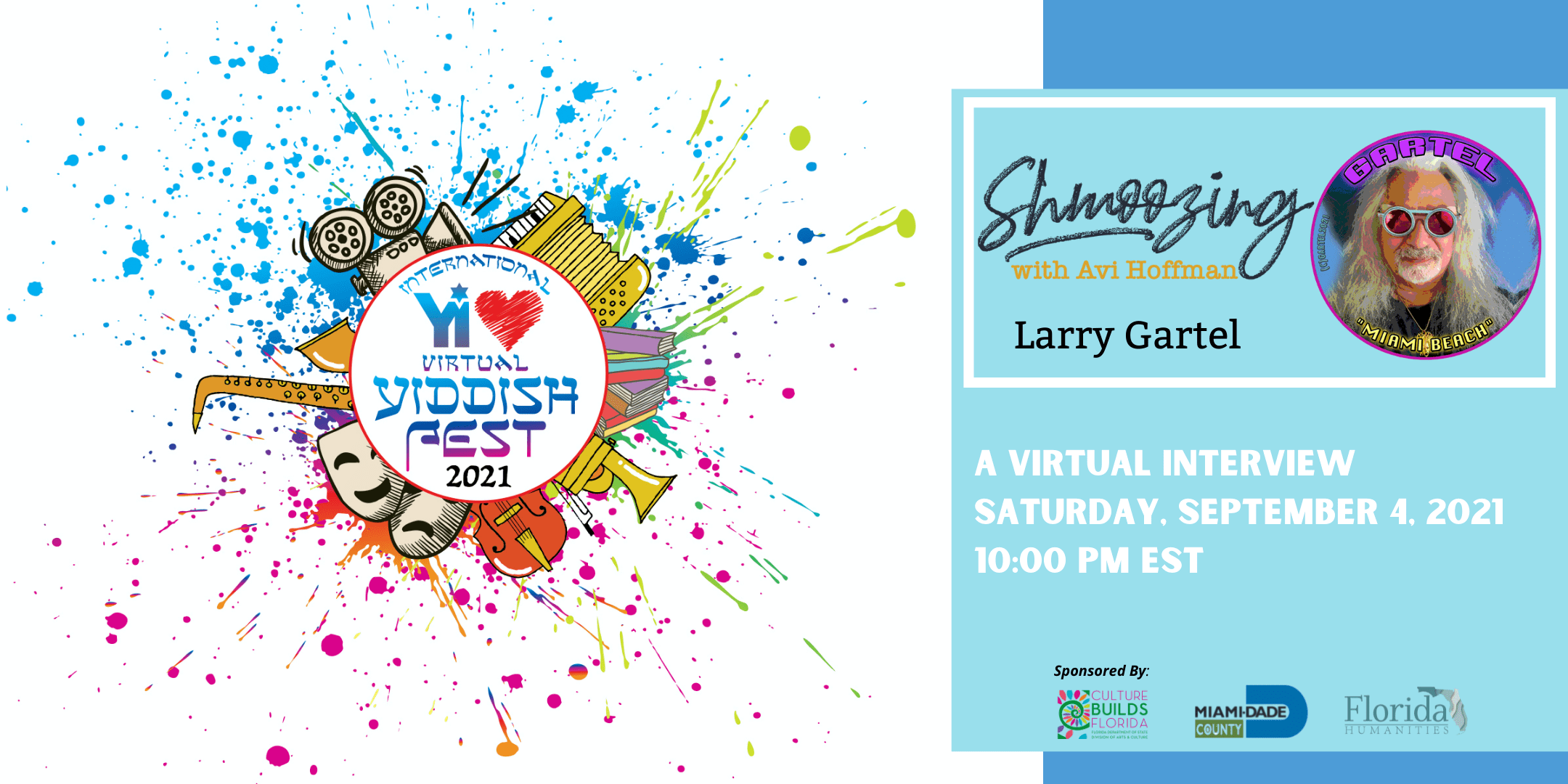 Shmoozing with Avi Hoffman featuring Larry Gartel, "Father" of Digital Art as part of YI Love Yiddishfest 2021 A proud program of Yiddishfest 2021!Larry Gartel is known to the world as the “FATHER” of Digital Art for over 40-years. His career started working side by side with video guru Nam June Paik at Media Study/Buffalo in upstate New York. He taught Andy Warhol how to use the Amiga Computer in order to produce the album cover for Debbie Harry (Blondie). Growing up in New York City during the Punk Rock era he was friends with Stiv Bators, Sid Vicious, Joey Ramone, […] 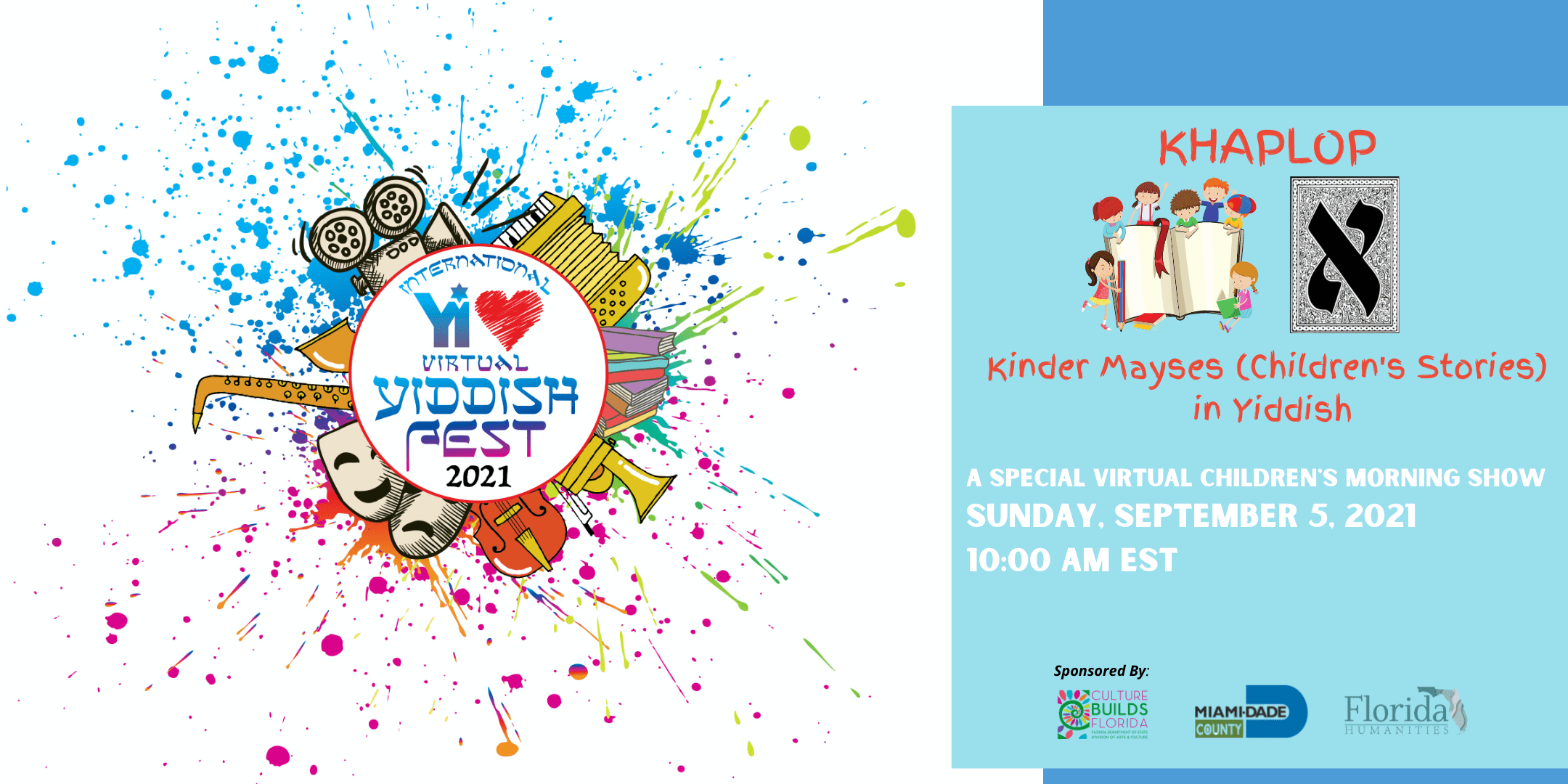 Khaplop: A special virtual morning show of Children's Stories in Yiddish as part of YI Love Yiddishfest 2021‘KhapLop’: Children’s Stories in Yiddish (and English) - Dr. Seuss and MoreTo view this free event LIVE and via replay, please go to the following links:https://www.youtube.com/c/YiddishkaytInitiative/featuredhttps://www.facebook.com/YILoveJewish/videosFor assistance:info@whyilovejewish.org888-YILOVEJ. 888-945-6835With the support of the Miami-Dade County Department of Cultural Affairs and the Cultural Affairs Council, the Miami-Dade County Mayor and Board of County Commissioners.Sponsored in part by the State of Florida, Department of State, Division of Cultural Affairs and the Florida Council on Arts and Culture.Funding for this program was provided through a grant from the […] 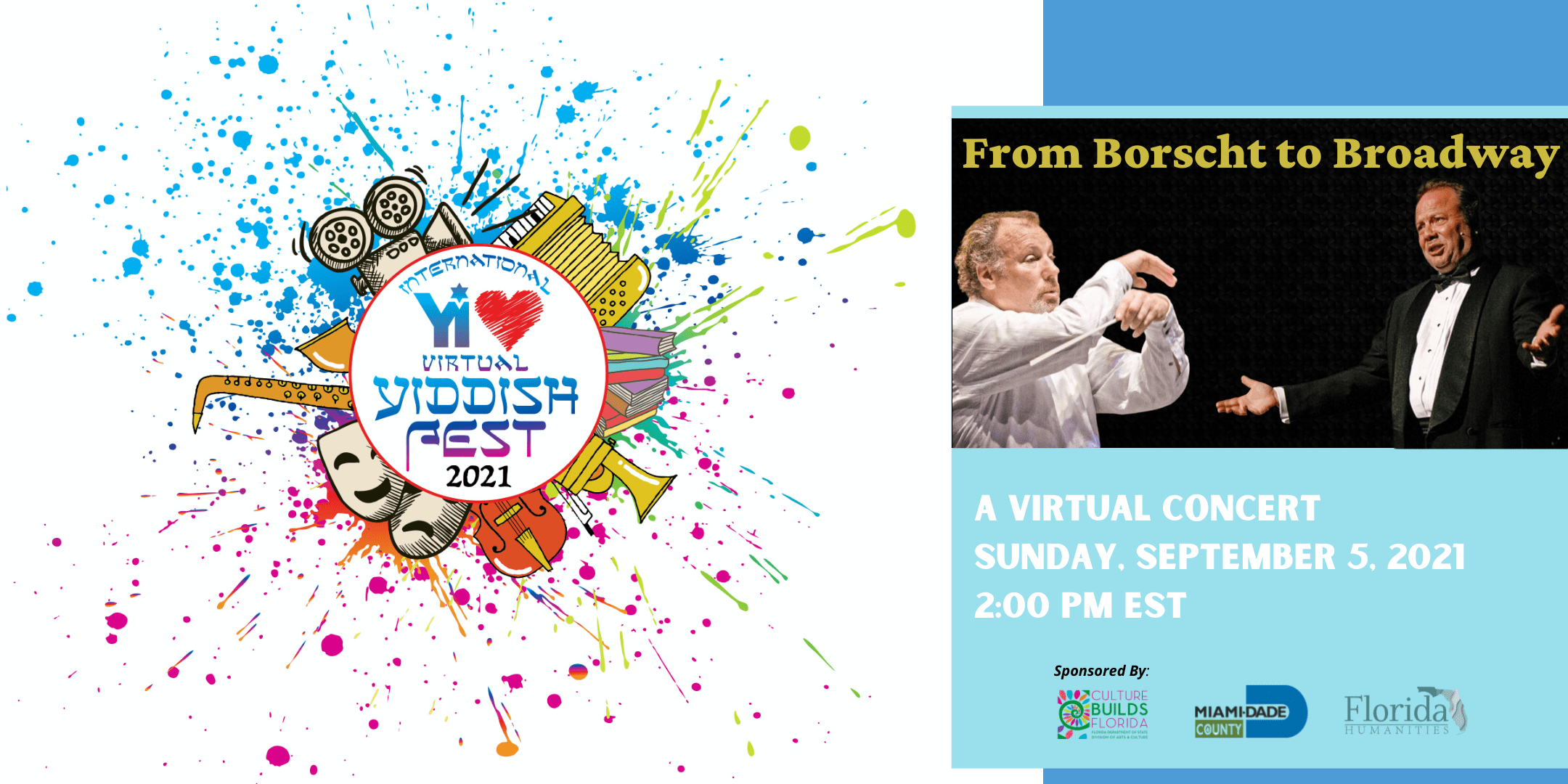 Borscht to Broadway: The Legacy of 2nd Ave - a virtual concert as part of YI Love Yiddishfest 2021Maestro Aaron Kula, leading the Klezmer Company Jazz Orchestra, and world-renowned entertainer Avi Hoffman will perform a concert that takes the audience on a musical journey from the origins of the Yiddish Theater on Second Avenue to the masterful treasures of Broadway. They will be joined by a full Orchestra and some of the most beloved south Florida singers as they highlight the most famous songs ever written, utilizing the Klezmer, Swing and Jazz band arrangements of 1940, 50’s and beyond. Aaron Kula […] 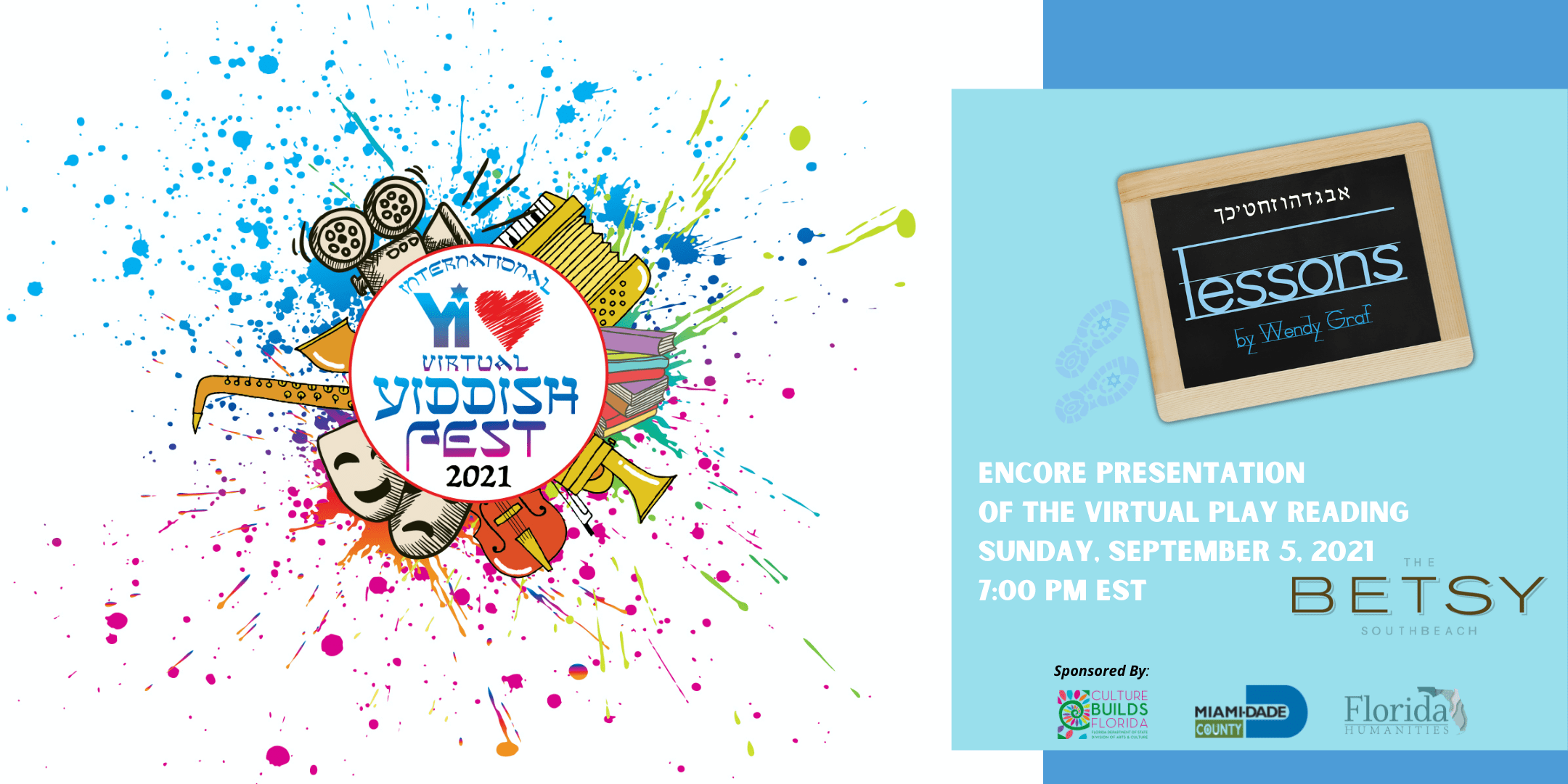