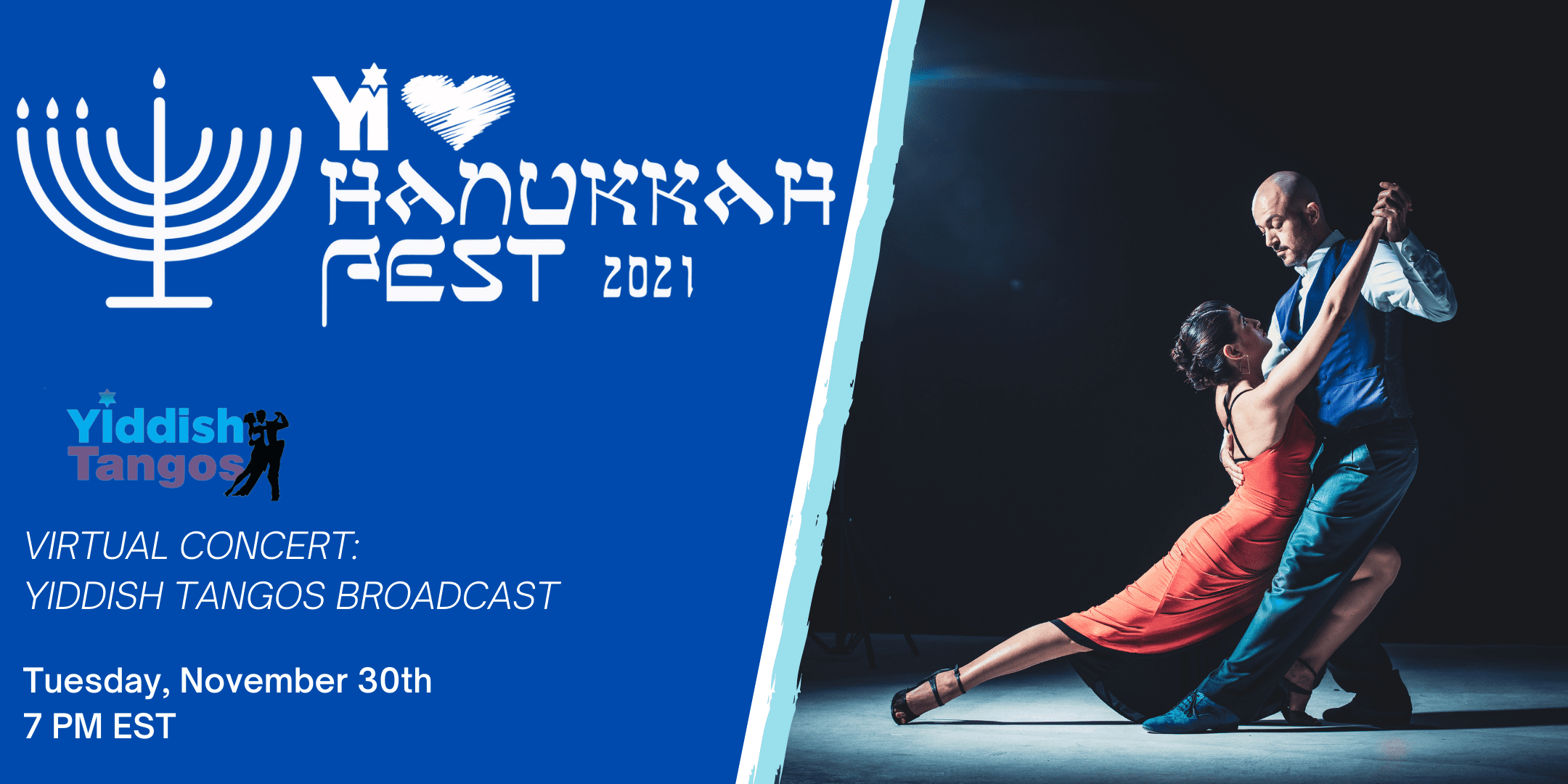 Your tax deductible donation in any amount qualifies you to receive a private YouTube link in order for you to join us for a LIVE virtual concert of Yiddish Tango performances by world-renowned Klezmer scholar Aaron Kula and award-winning actor Avi Hoffman from South Florida MARJCC in North Miami Beach as part of YI Love Yiddishfest 2021.

Fusing Yiddish melodies with tango rhythms produces a distinct and sensuous sound embracing two distinct cultures. During World War II tango was the rave on both sides of the Atlantic, and Jewish composers added their voice to this popular genre. World-renowned Klezmer scholar Aaron Kula has arranged Yiddish and Klezmer tunes to tango rhythms and is joined by award-winning performer Avi Hoffman. This is a program that brings passion to Yiddish music and appeals to audiences of all ages and has been featured at major festivals in Miami and Romania.

About Aaron Kula and Avi Hoffman:

Aaron Kula is a nationally recognized conductor, educator, composer, accordionist, and producer, who was awarded a 2018 grant as a Fulbright Specialist to conduct and lecture in Israel with appearances at the U.S. Embassy, Jerusalem Academy of Music and Dance, schools in the Central and Southern Arava, and at conservatories throughout the Western Galilee. He attended the New England Conservatory of Music and pursued graduate studies in conducting, theory, composition, and ethno-musicology with world-class musicians including Gunther Schuller, Frank Battisti, John Heiss, the late sitarist Peter Row, and members of the Boston Symphony Orchestra.

As an orchestral conductor, Aaron Kula has led orchestras throughout the US, Europe, and Israel. From 1986-2013 he served on the conducting faculty at New England Conservatory of Music in Boston and taught at Boston University from 1995-1996. He led high school and college orchestras at Chautauqua Music School in New York from 1990-1995. An active guest conductor, he has worked with Boston Ballet, Miami City Ballet, Erie Ballet (PA), Boston Conservatory Symphony, Santa Fe Symphony and Chorus, Boca Raton Sinfonia, and New Hampshire Ballet. Locally he was invited to conduct the Collier (FL) All-County Honors Orchestra in Naples during the 2014 season. He has collaborated with renowned artists including Yo-Yo Ma/cello, Richard Stoltzman/clarinet, Colin Carr/cello, Denise Graves/singer, David Leisner/guitar, and Avery Sommers/actress, Avi Hoffman/Yiddish actor, as well as artists from the Metropolitan Opera and members of the Boston Symphony Orchestra. As music director of the New England Conservatory Youth Symphony from 1986-2003, Mr. Kula led numerous international orchestra tours throughout Europe and Israel and was invited to organize international tours for the Harvard Radcliffe Orchestra and the Stanford Symphony Orchestra from 1996 to 1998.

Avi Hoffman​, a child of Holocaust survivors, was recently awarded Congressional Recognition and was inducted into The Bronx Jewish Hall of Fame for his lifetime achievements and was nominated for the 2015 Drama Desk Award as Outstanding Actor in a Play for his portrayal of Willy Loman in Death of a Salesman in Yiddish. As a performer, he is best known for his five decades of work in Jewish and Yiddish culture and his award-winning one-man shows Too Jewish? (Performer of the Year 1995, NY Press Magazine; L.A. OVATION award 2001 for Best Actor In a Musical; NY Drama Desk and Outer Critics Circle award nominations), Too Jewish, Too! and Still Jewish After All These Years. On TV, his shows have been broadcast nationally on the PBS system. He played the recurring character of Sid Raskin in the Starz TV series Magic City, and was featured on Netflix’ Bloodline, USA’s Graceland, A&E’s The Glades and on the NBC series Law and Order.

Avi has performed all over the world, has extensive acting, directing, writing and producing credits, having received multiple awards and nominations. He is currently producing documentary films relating to the worlds of Holocaust and Yiddish and for his work on the Dachau Album: An Interfaith Holocaust Program, Avi was invited to the Vatican to meet Pope Francis. It was inspiring and life-changing.

Ticket holders for this event will be given a private link for viewing.