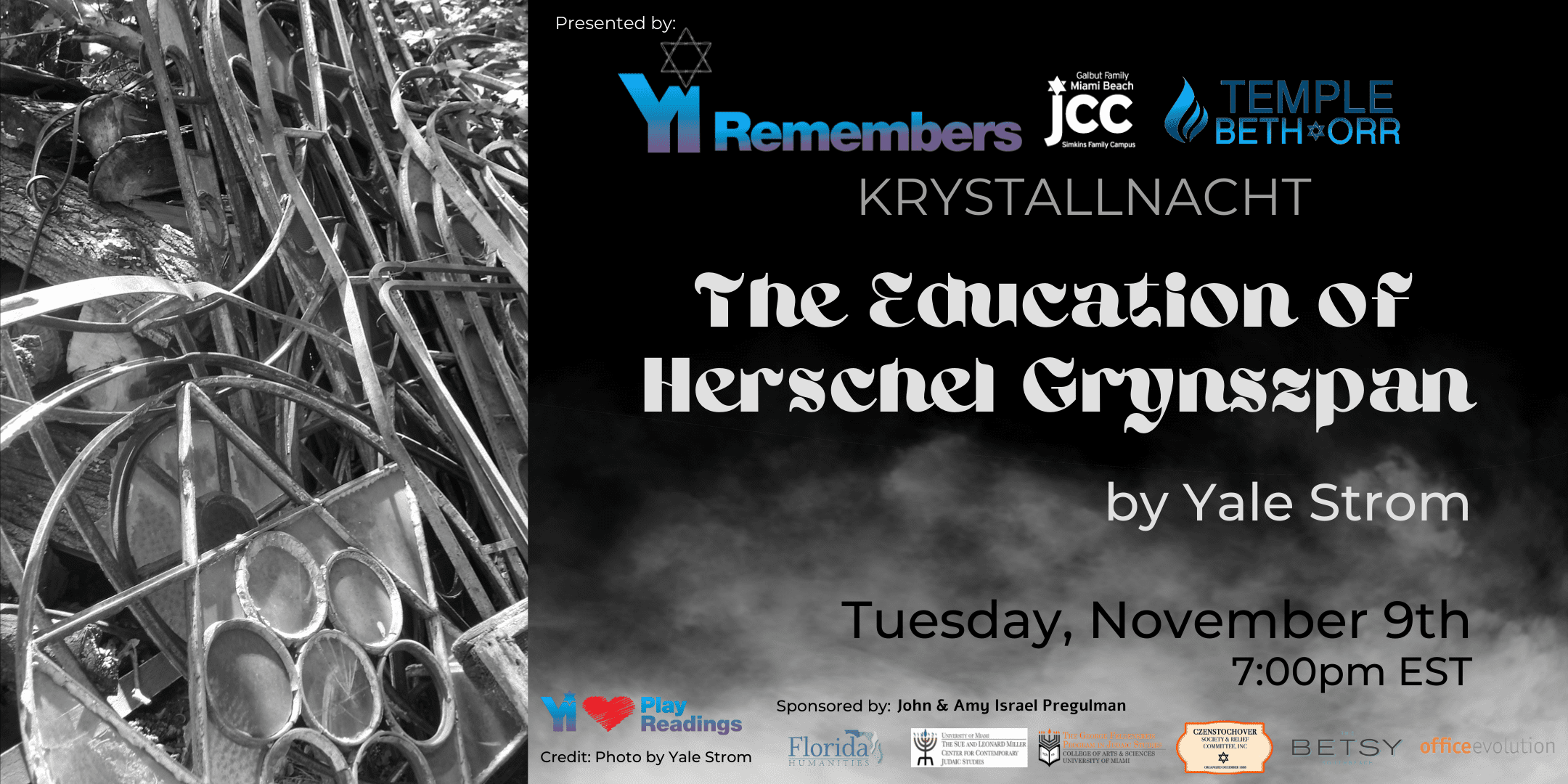 The Education of Herschel Grynszpan, based on true, historic accounts, is a dramatization about the events that triggered World War Two.

Last year, the Florida State Legislature passed legislation that adds to the existing Holocaust Mandate. The new legislation designates the second week in November as Holocaust Education Week. This week was chosen to commemorate Kristallnacht, also called “Night of Broken Glass” as windows of thousands of Jewish places of business were smashed and over 1,000 synagogues were burned to the ground in Germany and Austria. Many Jews were murdered, and others were sent to concentration camps where they had to endure hard labor.

The Education of Herschel Grynszpan, based on true, historic accounts, is a story about two passengers sharing a train from Krakow to Warsaw on November 1, 1938. Meyshke Labushnik says he is a Klezmer violinist. His trainmate is young Herschel Grynszpan, who is about to enter university.

Times are tense in Poland, and Meyshke reads the newspaper, explaining to Herschel the troubling aspects of the rise of antisemitism throughout Europe, North Africa and the Middle East. He bristles when the authorities randomly ask the passengers to show their identification papers.

Meyshke is desperate to impart to Herschel the severity of the times, and that the Jews must not wait to change their circumstances. As the train gets closer to its destination, we find out the truth about Meyshke’s journey. He is in a clandestine Jewish organization that is illegally smuggling Jews out of Poland into Palestine, for which he could be arrested and killed. When the police arrive to arrest Meyshke, Herschel is shocked.

On Nov. 7th 1938, Herschel Gyrnszpan entered the German Embassy in Paris and mortally wounded Third Secretary Ernst von Rath. On Nov. 9th, in response to the shooting in Paris, German Propaganda Minister Joseph Goebbels gave an inflammatory speech which triggered Krystallnacht. Hundreds of synagogues were torched, 7,000 Jewish businesses were looted, Jewish cemeteries were desecrated, ninety-one Jews were murdered and 30,000 Jewish men were arrested and sent to the concentration camps in Dachau, Buchenwald and Sachsenhausen.”

Yale Strom (playwright) is one of the world’s leading ethnographer-artists of Klezmer and Roma music and history. He has done extensive ethnographic research in Eastern Europe. His findings were instrumental in forming the repertoire of his Klezmer band, Hot Pstromi, based in New York and San Diego. Since organizing his band in 1981, he has composed original New Jewish music that combines Klezmer with Khasidic melodies, as well as Romani jazz, Classical, Bluegrass, Balkan, Arabic and Sephardic motifs. Strom’s compositions range from several quartets to a full symphony. His classical works are distributed by Donemus Publishers in The Hague, Netherlands. These works have been performed by the St. Louis Symphony Orchestra, San Diego Chamber Orchestra, San Diego Ballet, Malashock Dance Company, Hausmann Quartet, Burdick-Thorne String Quartet, Rachel Barton Pine, Mike Block, Bordeaux Philharmonic, the Ostrava Philharmonic of the Czech Republic, and others. In addition, he has composed original music for theatre, film and television. Yale’s fifteen CDs run the gamut from traditional klezmer to “new” Jewish jazz. His CD’s are on the Naxos, Transcontinental Music and ARC UK labels. His latest CD is “Yale Strom’s Broken Consort: Shimmering Lights.” As a collaborator, Strom has had numerous world-renowned partners performing from Carnegie Hall to the United Nations General Assembly to the Kennedy Center, with such artists as: Andy Statman, Mark Dresser, Marty Ehrlich, Alicia Svigals, Joel Rubin, Hankus Netsky, Peter Sprague, Mike Block, Samir Chatterjee, Salman Ahmad, Muszikas, Marta Sebastyen, Gavin Rossdale, Damian Draghici, Sara Caswell and Kalman Balogh and many others.

Strom was artist-in-residence in the Jewish Studies Program at San Diego State University, a position created for him in 2006. Currently he is a professor in the Music Department Prior to this, he taught at New York University.