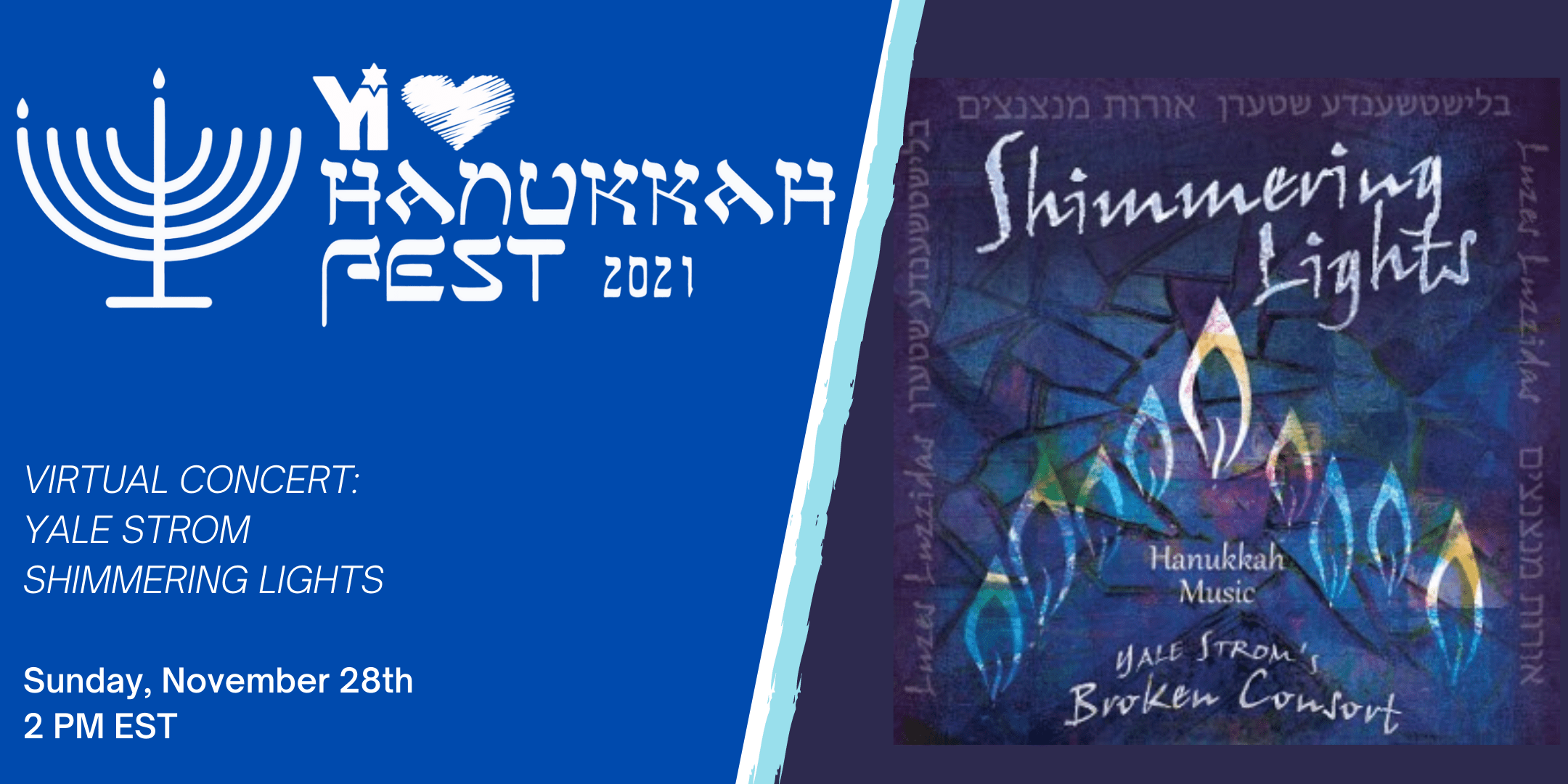 A virtual concert of Shimmering Lights by Yale Strom.

Yale has produced ‘Shimmering Lights’ with world class musicians called ‘Yale Strom’s Broken Consort.’ In the 16th and 17th centuries in England, the term ‘musical consort’ referred to both ensemble and performance. A whole consort stayed within the same instrumental family – for example, violin, viola, cello and bass. What, then, is a broken consort? A broken consort is a harmonious ensemble of different kinds of instruments, often including an instrumental family but adding instruments from without. Yale’s ensemble was “broken” by guitar and voice.

“ We wanted the repertoire to present a sense of how Khanike (Hanukkah) was and is celebrated by different cultures around the world… When you listen to these songs, you’ll hear the musicians thinking out loud and sharing their inspiring thoughts and ideas with each other. Each of us has our own personal references, ranging from classical to jazz and blues, to Middle Eastern, klezmer, bluegrass and Texas swing. You’ll hear all of this as we fuse seamlessly with each other. ” – Yale Strom

Yale Strom (violin) is one of the world’s leading ethnographer-artists of Klezmer and Roma music and history. He has done extensive ethnographic research in Eastern Europe. His findings were instrumental in forming the repertoire of his klezmer band, Hot Pstromi, based in New York and San Diego. Since organizing his band in 1981, he has composed original New Jewish music that combines klezmer with Khasidic melodies, as well as Roma, jazz, classical, Bluegrass, Balkan, Arabic and Sephardic motifs. Strom’s compositions range from several quartets to a full symphony. His classical works are distributed by Donemus Publishers in The Hague, Netherlands. These works have been performed by the St. Louis Symphony Orchestra, San Diego Chamber Orchestra, San Diego Ballet, Malashock Dance Company, Hausmann Quartet, Burdick-Thorne String Quartet, Rachel Barton Pine, Mike Block, Bordeaux Philharmonic, the Ostrava Philharmonic of the Czech Republic, and others. In addition, he has composed original music for theatre, film and television. Yale’s fifteen CDs run the gamut from traditional klezmer to “new” Jewish jazz. His CD’s are on the Naxos, Transcontinental Music and ARC UK labels. His latest CD is “Yale Strom’s Broken Consort: Shimmering Lights.” As a collaborator, Strom has had numerous world-renowned partners performing from Carnegie Hall to the United Nations General Assembly to the Kennedy Center, with such artists as: Andy Statman, Mark Dresser, Marty Ehrlich, Alicia Svigals, Joel Rubin, Hankus Netsky, Peter Sprague, Mike Block, Samir Chatterjee, Salman Ahmad, Muszikas, Marta Sebastyen, Gavin Rossdale, Damian Draghici, Sara Caswell and Kalman Balogh and many others.

Strom has also directed nine award-winning documentary films, written thirteen books and two audio dramas. The latest audio drama is Debs in Canton starring Phil Proctor. Strom’s next book comes out in November to be published in English, Yiddish and Swedish called “Shloyml Boyml’s Lucky Dreydl.” His latest documentary film is “American Socialist: The Life and Times of Eugene Victor Debs.” Currently, Strom is developing a musical about the life of artist Marc Chagall with the San Diego Repertory Theatre.

Strom is currently artist-in-residence in the Jewish Studies Program at San Diego State University, a position created for him in 2006. Prior to this, he taught at New York University.