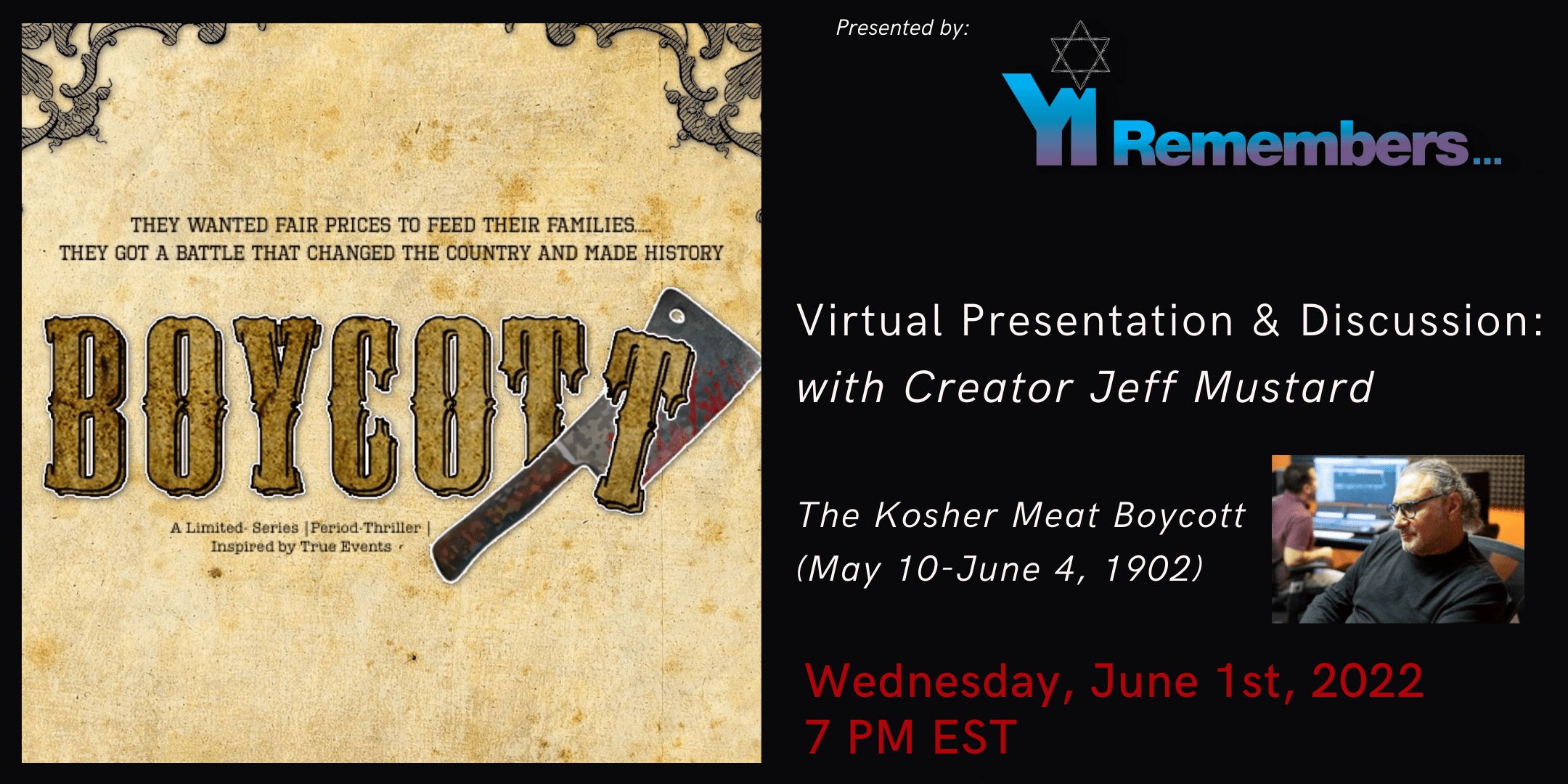 The Kosher Meat Boycott (May 10-June 4, 1902): A virtual presentation and discussion with Creator Jeffrey Mustard

In 1902, the women of New York City’s Lower East Side banded together to create the first-ever all-female led Boycott to protest a dramatic increase in the price of beef by the nation’s most powerful monopoly.

Before Thelma and Louise, before Norma Rae, before Karen Silkwood, and before Erin Brockovich, there was “Fanny and Sarah,” the Jewish Immigrant women of grit, spirit, and determination who initiated what has come to be known as the 1902 Kosher Meat Boycott. At a time when women did not even have the right to vote, living lives under the firm thumb of patriarchy, these indefatigable women, of common stock, leading typical lives of toil at the turn of the century at nearly the zenith of the industrial revolution, would not yield, bow, or cave to men representing the largest and most powerful monopoly of the time — the Big Six Cattle Barons, a cabal that controlled the country’s entire meat industry.

Whether his subjects or subject matter is more than than 100 years old, such as the female-fueled meat boycott in the early 1900s, or as recent as the past three months, such as the murder of George Floyd, Jeff Mustard’s projects are fascinating. A multiple award-winning writer for print, radio, and television, Mustard’s work artfully blends entertainment and education to illuminate pivotal moments of extraordinary value in the nation’s history, each a critical inflection point in the EKG of the pulse, and the future, of the country.

Mustard spent more than three years working on his tv show, Boycott, a remarkable and entertaining work of historical-fiction he created as a limited-series tv show inspired by the real-life events of the 1902 Kosher Beef Boycott. For barely three weeks in May of 1902, the women of NYC’s Lower Eastside in Ward 10, protested, rallied and marched against the increase in the price of Kosher Beef, from 12 cents a pound to 18 cents, secretly imposed by the Big Six Cattle Barons. Mustard connects fantastic historical dots never before unmasked. It offers fascinating insights into one of the country’s most important but unrecognized events in U.S. history – driven by the power of women whose impacts we still feel today.

He Wanted to Sell His TV Show, So He Wrote a Musical

After creating and writing four of the six one-hour episodes of the limited T.V. series, Mustard had a late-night epiphany. “This could be a musical stage play,” says Mustard. And like that, Mustard decided the show could be produced as a stage play.

Not just any stage play, but profoundly influenced by Lin Manuel Miranda’s fantastic, revolutionary, groundbreaking hip hop musical, “Hamilton.” Says Mustard, “Hamilton is, for the most part, a history lesson story, and so too is Boycott.” In Mustard’s mind, the show could be staged and produced with limited sets, it’s a highly visual, compelling, period piece, and after all, who doesn’t love a story set in New York City in the early 1900s, and best of all, it’s primarily an all-female cast.”

For the better part of 2019, Mustard set out to write and then produce what became six songs representing the first act of a musical stage play. Presently six tracks are comprising a little more than 60 minutes of full-on hip hop lyrics that not only tell the “story of the boycott” but as importantly, and interestingly, also touches on compelling historical flourishes that involve, and include, President Theodore Roosevelt. Says Mustard, “Teddy Roosevelt enthusiasts, historians, even scholars will be fascinated or intrigued, or hopefully both as the year of research that went into the writing of the story revealed incredible unknown facts I’ve weaved into the tale,” says Mustard.

When George Floyd was murdered, Jeff Mustard, like many, like most, was horrified. “I was literally outraged and sick when I saw what happened to George Floyd,” says Mustard. After a little more than a week of repeatedly seeing Mr. Floyd’s death play on the news, and watching what was unfolding in the country, Mustard was compelled to channel his anger. He did so by putting words to paper. Those words became a song, that song attracted a rapper. That song has recently been turned into a music video, covered recently by CBS News, that will soon be released.

As, if not more important, the lyrics of the song, impart two culturally relevant messages. Produced and released under the title, “Enough” the two-part song has two distinct messages. The first movement of the song, “How We Got Here,” is a double-entendre word-play that encapsulates 400 years of the African-American slave experience, commencing from England through to plantation enslavement. Part 2 of the song, “Arrest, Death, Revolution,” starts with the George Floyd Murder. The 4:00 minutes of this movement expresses the pain, sorrow, injustice, and inequality in America. It is also an in-the-face, full-on reflection of the country’s horrible truths – past and present.

Says Mustard, “This song represents the cornerstone of a new media banner Mustard formed that will create and produce projects specifically designed to address social injustice.” To this end, Mustard already has lyrics written for his next social justice song, “Confederate Free” an anthem/ballad, that discusses, and supports, the Anti-Confederate Monument Movement.