Borscht to Broadway – a Virtual Concert 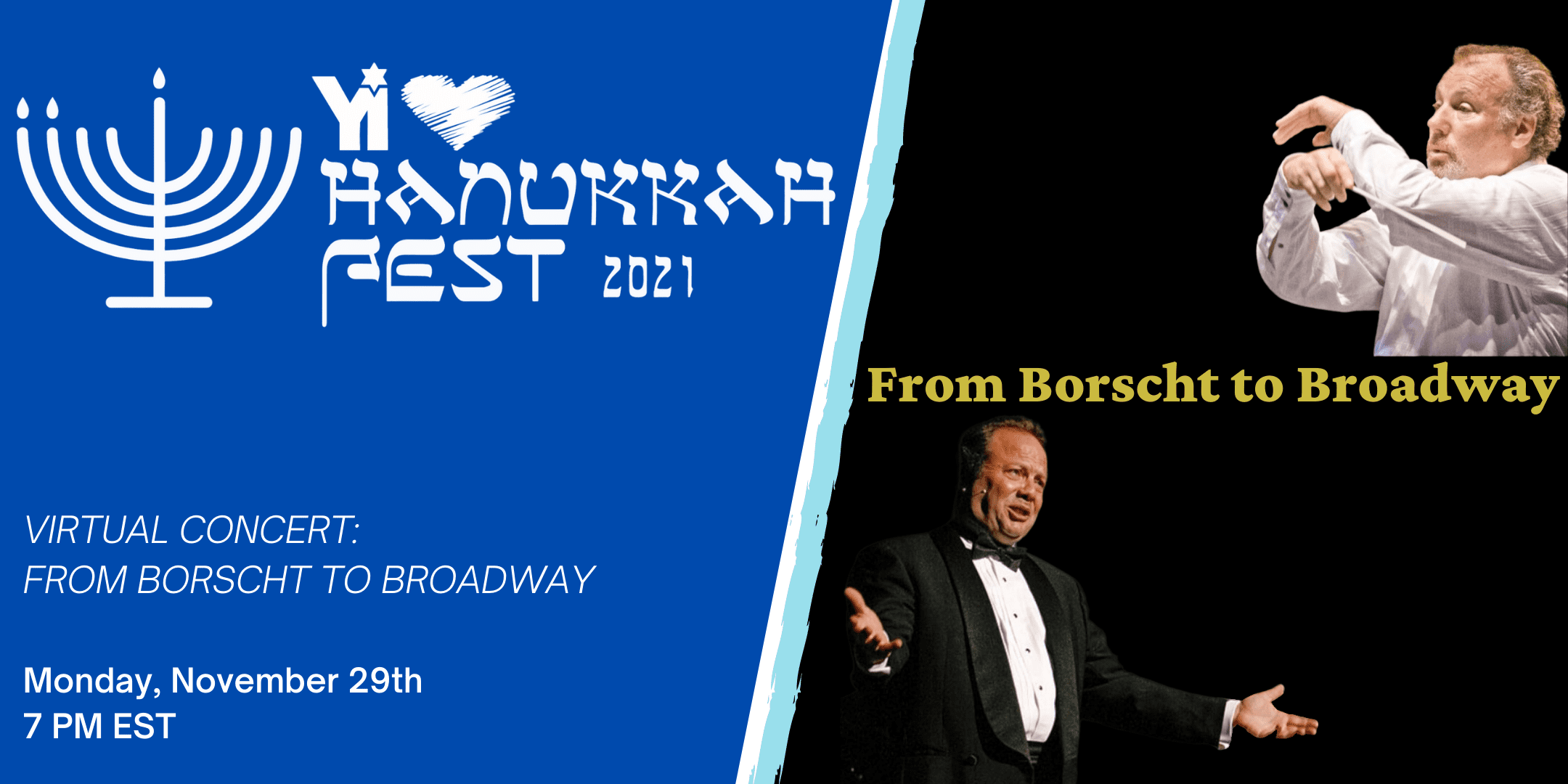 Borscht to Broadway – a Virtual Concert

Borscht to Broadway: The Legacy of 2nd Ave – a virtual concert as part of YI Love HannukahFest ’21

Maestro Aaron Kula, leading the Klezmer Company Jazz Orchestra, and world-renowned entertainer Avi Hoffman will perform a concert that takes the audience on a musical journey from the origins of the Yiddish Theater on Second Avenue to the masterful treasures of Broadway. They will be joined by a full Orchestra and some of the most beloved south Florida singers as they highlight the most famous songs ever written, utilizing the Klezmer, Swing and Jazz band arrangements of 1940, 50’s and beyond. Aaron Kula and Avi Hoffman performing together, with the KCJO and the best theatrical talent of South Florida, will be a historic concert event that will never be forgotten.

A nationally recognized conductor, educator, composer, accordionist, and producer, Aaron Kula is a Fulbright Specialist recipient and was awarded a grant in 2018 to conduct and lecture in Israel with appearances at the U.S. Embassy, Jerusalem Academy of Music and Dance, the Central and Southern Arava in the Negev, and music conservatories in the Western Galilee. Aaron began his studies at the Hebrew Arts School now the Kaufman Music Center, in New York City under the tutelage of the late Dr. Tzipora Jochsberger, followed by studies at the Rubin Academy in Jerusalem. During his 25 year residency in Boston, he attended New England Conservatory of Music, where he studied conducting, theory, and composition with members of the Boston Symphony Orchestra, Gunther Schuller, Frank Battisti, John Heiss, and the late sitarist Peter Row. Mr. Kula’s interdisciplinary career in jazz, classical, and folk music led him to form the award-winning genre bending Klezmer Company Jazz Orchestra in 1997 (formerly Klezmer Company Orchestra). In May 2018 the United States Congress awarded Mr. Kula a Certificate of Special Congressional Recognition for his “outstanding and invaluable service to the community” in the field of music.

An innovator of concert programming, he has conducted concert productions of complete Broadway musicals with full orchestra including: My Fair Lady in Concert (2019), Funny Girl in Concert (2018), Fiddler on the Roof in Concert (2017), and others. Mr. Kula also led the first Florida performances of Duke Ellington’s Black, Brown, and Beige in 2011 and Bernstein’s Jeremiah Symphony in 2016, both with the KCJO. Mr. Kula is artistic director of south Florida’s Kultur Festival now in its 13th year, and currently in residence at the Levis Jewish Community Center in Boca Raton, Florida. As a producer Kula is managing director of Kula Concert Productions and Broadway in Concert. From 1997-2019 Kula created an interdisciplinary music performance department at Florida Atlantic University Libraries to present concerts, produce cultural arts festivals, and lead educational outreach programs. One of Mr. Kula’s goals is to transform the concert experience for the audience by adding multimedia presentations to performances, programming multi-genre concerts, and using archival music as part of a project called “Shelf to Stage.” As a composer, he has transformed over 150 compositions by re-imagining vintage sheet music from the music archives. Mr. Kula has produced three studio albums of what is described as “world Jazz”; Beyond The Tribes (2009), Klezmerology (2011), and JubanoJazz (2016). In 2011, Beyond the Tribes was selected by a juried committee from the Library of Congress (LOC) for inclusion in the Copyright Acquisitions Division. The LOC determined that the album represented an important cross section of American culture and would “enrich the collections.” In 2018 and 2019 Mr. Kula was invited to perform at the International Yiddish Tes Fest in Bucharest, Romania. In 2011 and 2014, Mr. Kula led KCJO on concert tours to California, Arizona, Rhode Island, and in 2015, the ensemble was invited to perform in Canada at the Ashkenaz Festival in Toronto and the Montreal Jewish Music Festival.

As a conductor, Aaron Kula has led orchestras throughout the US, Europe, and Israel and served on the conducting faculty at Florida Atlantic University (1997-2020) New England Conservatory of Music in Boston (1986-2013), Boston University (1995-1996), Chautauqua Music School in New York (1990-1995). An active guest conductor, he has worked with Boston Ballet, Miami City Ballet, Erie Ballet (PA), Boston Conservatory Symphony, Santa Fe Symphony and Chorus, Boca Raton Sinfonia, and New Hampshire Ballet and in 2014, was invited to conduct the Collier (FL) All County Honors Orchestra. He has collaborated with renowned artists including Yo-Yo Ma/cello, Richard Stoltzman/clarinet, Colin Carr/cello, Denise Graves/singer, Håkan Hagegård/singer, David Leisner/guitar, and members of the Boston Symphony Orchestra among others. As music director of the New England Conservatory Youth Symphony from 1986-2003, Mr. Kula led numerous international concert tours throughout Europe and Israel and organized European tours for Harvard Radcliffe and Stanford Symphony Orchestras between 1996-1998.

Mr. Kula began studying the accordion at the age of 10 and performs music of all genres. He performs regularly with KCJO and collaborates with musicians such as Grammy Latin jazz flautist Nestor Torres and artists from other south Florida organizations including University of Miami and New World Symphony in Miami. From 2009-2011, Mr. Kula was invited to serve as a consultant for the American Klezmer exhibit at the International Musical Instrument Museum in Phoenix, Arizona. Maestro Kula is a member of ASCAP, League of American Orchestra, College Music Society, and Boston Musician’s Association 9-535.

Mr. Kula holds a Bachelor of Arts in music theory and Judaic studies from the University of Minnesota and a Master of Music in theory and conducting with Distinction in Performance from New England Conservatory of Music.